Our family, by Jack

Jack and Caroline’s school had an art fair. The kindergarteners were tasked with family portraits (after they were obviously taught “theory of a nose,” given all the weird noses bestowed upon us).

All the family portraits had the composition you’d expect: two parents, a couple of kids. 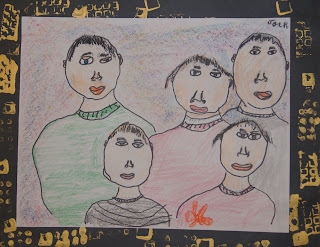 I said, "Well. Sweetie pie, I see you, and I see Caroline with the pretty flower on her shirt. And you know pink is my favorite color, so you gave me a pink shirt. And I guess one of these guys is Daddy. But who's the other one?"

Okay, well, Grumpy is what all the kids (aptly) call my dad. But that guy – neither guy – looked like my dad. In a few words, my father is bald and old. Those guys both looked like dads, but dads with hair, and young.

So it looked like Jack had two dads. And me, maybe the angry housekeeper.

So this morning I composed a long post about just how tickled I was by that family portrait. I showed the post to my husband.

“Well, I don’t exactly have your sense of humor, so maybe it’s funny to you, but it’s not funny to me.”

YOU THINK BOOGERS ARE FUNNY, AND YOU DON’T THINK THIS PICTURE IS FUNNY??

“No. I don’t. I think your post could be offensive.”

Then that became funny. But I realized I was tiptoeing in HIGHLY OFFENSIVE TERRITORY. Laughing at my husband was likely not a good idea.

Okay. I admit defeat. I won’t write about it, lest I offend someone. (Who? The art teacher? A fellow kindergartener?)

So this post was about how peer pressure can dampen a creative spirit. Got it? Peer pressure. That's not offensive to anyone.

(But, if you have a normal sense of humor and happen to crack a smile about the picture, it's okay. Just don't tell anyone.)
Posted by Julie Kennon at 12:32 PM