A Rite of Passage

Caroline turns nine tomorrow. I have found the kids outgrow those huge, everyone's-invited pizza/arcade parties after kindergarten. (It won't surprise you that I hate those parties. Bad pizza, potential pedophile hangout and a manic look as the kids search for the next game to play or deliberate over which tacky prize to choose. And take home. And treasure, which they do as soon as you suggest throwing it away.)

So for the past few years, Caroline has thought of celebrating on a much smaller scale. She's done New York with Maddie, Hershey Park with her family. Therefore, when she innocently said, "Mommy, can I have a few friends spend the night the weekend before my birthday?", I benevolently overlooked my distaste for sleepovers to say, "Sure, honey."

I learned a couple of things on Saturday night:

1. So much for for her advanced math class. "A few" apparently means 13.

2. 13 is an unlucky number. Don't let anyone tell you differently.

3. Little girls eat like linebackers. We went from chips and salsa to pizza and veggies to make-your-own sundaes to popcorn to Cheese Nips and pretzels to three packages of bacon, two round of pancakes, two dozen eggs, a bowl of fruit and banana nut bread. It took three emergency trips to the grocery store. It was seriously like feeding a small country. And feeding it well.

5. They will only stop talking and go to sleep when you're mean to them. In our case, this resulted in me standing in the middle of the family room with my arms crossed from 1:00 am to 1:30 am. And calling them preschoolers. Meanly. With a mean look. (Which was, unfortunately, wasted, because it was dark.)

6. Caroline's prizes for "last to go to sleep" and "first to wake up" were just plain dumb. Those two winners high-fived each other as they overlapped.

7. If you let them paint on pillowcases, it is guaranteed the dog will find them when they're wet, walk on them, and then walk all through your house. All over. Back and forth. Like he's on a mission. Like he hates you.

8. Sometimes they're really funny. For example, one girl wasn't allowed to watch SpongeBob, so they watched it in Spanish so she couldn't learn anything bad. (They still knew when there was a fart joke. That crosses any language barrier.)

9. "Your mom is here!" are the most beautiful four words in the English language. I think I actually skipped into the family room each time. One funny mom suggested I position Jack one block down with a walkie-talkie so I could have the girl packed and in the driveway when her car arrived.

10. They wear sleeplessness like a badge of honor. "One hour!" "Two hours!" "I didn't sleep at all!" When I say that, I'm usually ready to cry. They wanted medals.

(Now I know where she gets it. Obviously, to me, "a couple" of things I learned means ten.)

So, maybe the (apparently extremely displeased) sleepover god did smite me. And maybe I had to deal with a child who spoke in tongues for the rest of the weekend. But remember how I am a self-professed sucker? Caroline had Whit take her on a secret afternoon trip on Sunday. She handed me these (exquisitely and perfectly Caroline-ish) flowers with a "thank you" and a hug, and while I can't say I'd do it all over again, I can say it was almost worth it. 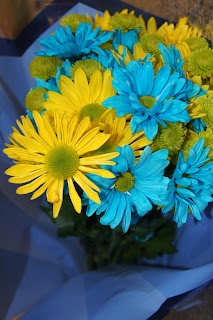