Whit’s parents came in town last week. To give you an idea of what they’re like, they didn’t tell Jack they were coming. Rather, Dave, my father-in-law, showed up as a kindergarten Mystery Reader. This adorable kindergarten tradition lasts throughout the year, and parents surprise the kids by showing up in costume and reading a book to the class. I’ve been an elf (Polar Express) and Fancy Nancy, Whit has been Horton and Snoopy. It’s always fun, but Jack realizing that Mike Mulligan was actually Gramps, who lives eight hours away, was really special. 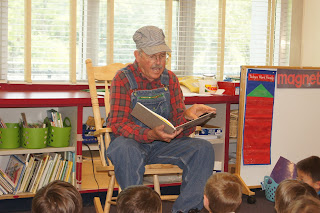 Anyway, they’re in their seventies, and they’re very active and healthy. Age is never an excuse for anything, unless it’s an afternoon nap or the right to drink as much wine as they want and then sleep in. They’re a lot like me and Whit (and by that I mean they’re pretty young old folks…not that we’re pretty old young folks). (But sometimes people say Whit was born at age 40. And they’re right.)

So on Friday, Whit had the great idea of taking them on a hike. We have a nice little mountain near us; it’s got trails the kids can handle as well as some dicier ones. Once you get to the top, there’s a great view. Whit told them it was basically a walk in the woods; I told them I remembered some spots that could be tricky. Either way, we packed a picnic, leashed the dog and set off.

None of us had too much trouble getting to the top. But the rocks were slippery, and it was foggy. There were also some loose rocks, so we had to watch where we stepped, and I even had Whit hold Bo’s leash so I could pay attention to where I was climbing. It definitely wasn’t a walk in the woods. It was a hike. His parents seemed to love it.

Later, Whit’s mom said to me, “Dave and I are so flattered you thought we could do that hike."

It never, ever occurred to me they couldn’t.

And they did it, although the memory will probably be of the time Whit and Julie dragged them up a mountain meant for billy goats, not senior citizens.

And I realized that’s who I want to be.

I feel very invincible in my (gulp) 40’s and I want to be that invincible in my 70’s. My mother-in-law has a mantra for me, one she started when my mother died: Sunscreen. Calcium. Sleep. Exercise. Wine. She swears that if you liberally incorporate all those things into your life from your 30’s on, you’ll pretty much remain vibrant until you drop dead of old age. (By the way, my mother dropped dead very early, from cancer, and the only one of those things she incorporated liberally was the wine. I’m guessing one needs a little balance.)

My seventies are far, far away from me right now. I can’t even wrap my head around what my life will look like then. But I do know that I look at my mother-in-law, and I want to be a lot like her. I look at my father-in-law, and I want Whit to be just as healthy and strong. And, in all honesty, I want Jack and Caroline to look at us, even now, and think getting older isn’t so bad.

So I’ll go take my calcium and get a little zen to calm my hyperactive brain. And try to remember that I’ve got to be a role model for years and years to come.

Geesh. Now we can't even just relax and get old without trying to do it well.

No pressure, right?
Posted by Julie Kennon at 11:53 AM