So the soccer season ended Saturday, mercifully. Or perhaps I should say "mercilessly" seeing as the girls didn't win one, single game. They tied quite a few, so Caroline chalked those up as wins, but they really ended the season with a big fat zero. To be fair, I am convinced our team was the only one raised on organic milk: every other girl on every other team looked like they had been held back and they really belonged in fifth grade. They towered over our girls.

But, if you read the Coach Dad post in which I predicted a "flaming, detonating disaster of gigantic proportions," you will suddenly label me a psychic. Because this is the picture that best sums up Whit's coaching experience: 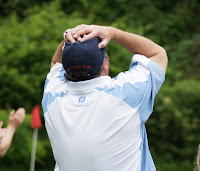 My very mild-mannered, calm husband was a flippin' lunatic on the sidelines. He jogged back and forth, screamed plays and advice constantly (usually helpful, though I swear I once heard, "DO YOU EVEN KNOW HOW TO RUN????" screamed at one particularly immobile girl), grabbed his heart for effect often and hopped up and down like Tigger to convey his frustration and/or excitement. Now, to be fair, he also tied shoelaces, adjusted ponytails and poured cold water on sweaty heads when they requested it -- but mainly, he was like an NFL coach in a MyGym play session. His level of coaching was just, well, intense.

I am biased, but I think he did a fantastic job. They scored, just not enough to win. He taught them strategies that worked when they would implement them. (Jack would hang out with Whit and then go to his kindergarten games and yell, "Get wide! Man on!" to his very bewildered teammates.) But really, he almost gave himself a heart attack. And he never once experienced the thrill of third-grade victory. As I saw it, all he ever did was yell at these girls, get himself worked up and then get pissed. At everyone. Even me.

So when we were done with the last loss (ahem, I mean game), and we were eating bagels and doughnuts and Whit was handing out trophies, I finally breathed a sigh of relief.

Whew. We had made it. Whit had coached, Caroline had loved it, Jack was the best player on his kindergarten team, and my friends were still speaking to me in spite of my husband yelling at their daughters. Over. Done. Never again.

Until Whit said to one girl, "Excellent offensive work this season. I know exactly where I'm putting you next season."

If you can't find me in the fall, look under my bed. I'll just hide until it's over.
Posted by Julie Kennon at 9:48 AM