My dog makes my kids look so good. 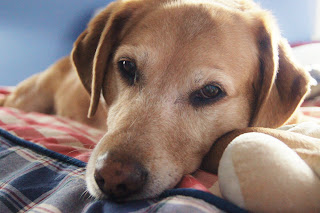 Bo’s a really good dog. He’s toddler road-tested; he’s worn birthday hats and tutus, he’s been ridden like a horse and had his tail yanked or his fur pulled a thousand times. We've forgotten walks and forgotten food and made him wear blinking antlers at Christmas. He’s lived through my kids and all their friends and all my siblings’ kids and he’s never done more than roll his doggy eyes at the humiliation he’s endured.

He’s also a really bad dog. He opens the cabinet that houses the trash can and eats the trash. He jumps up on the counter or the kitchen table and eats anything he can reach. Twice he’s tried to eat I mean play with the unwilling guinea pig. He’s lumpy and stinky and doesn’t come when he’s called and pulls me so hard when I walk him that strangers stop and laugh at me.

But I love him, and I hate putting him in a crate in a kennel when we go away. So my neighbor told me about an awesome doggy camp place. I called, and they have room during the dates I want to bring him, but the owner wanted to interview him first. “This is, after all, my home,” the very sweet lady told me over the phone.

On the drive out to the country, I said sternly to the dog, “Now you listen. Behave. Do not run right through screen doors; you stop at them like normal doors. Do not jump up on her counters. Do not run between her knees and cripple her so she’ll scratch your butt. Just act like a normal dog and maybe she’ll let you stay there when we go away.”

Once we got there, he took one look at the four rolling acres and jumped out of the car. He was off. St. Francis, busy guarding a horde of concrete animals with a stony glare, was knocked over instantly. Impatiens and mums were trampled, other dogs’ water dishes were tipped over. He peed everywhere and tried to squeeze his fat body through the wood slats on her front porch until they groaned and threatened to splinter and/or decapitate him. He ate dirt and jumped in a pool and knocked over countless figurines. He moved through those four acres like a hurricane. And then he tried to get in the front door.

Wide eyed, I looked at the sweet lady, expecting her to say, “Get your damn Satan dog home.” Instead, she smiled a true dog-lovers smile and said, “Of course he can go in!”

Well, you can imagine what happened next. Pancakes on the counter were slurped up so fast you didn’t even see them go. A barricade blocking off her formal living room crashed to the floor. A closed door received a flurry of furious scratching. He was a flash of yellow zipping through one room and then the next.

Hastily, the woman said, “Let’s get him back outside.”

I walked out with her. I thanked her for her time, half-heartedly promised he does eventually calm down, reassured her that he’s 12 years old and no old Lab can maintain that kind of energy for long. She kind of nodded and smiled and ushered me to my car.

She didn’t say he couldn’t come stay with her this fall, but she didn’t say she was dying to see him again, either.

“That’s okay,” I thought as I trudged back to my car, “I’ll find someone to stay at our house with him.”

I called Bo to come get in the car.

He took one look at me and ran back to her front door. There he sat, waiting to go inside.

He didn’t even turn his head. I started walking toward him.

He saw that and took off for the vast back yard.

I walked back there. He was up on her porch, testing to see if the back door was open. It wasn’t, so he flew down the steps in the opposite direction from me.

“Bo...” I said, in that warning voice mothers use when they’re embarrassed and about to lose their shit. “COME. NOW.”

He galloped along the fence line, ears flying. Almost audibly saying, “I can’t heeeeaarrrr youuuuuu...” (He’s learned that from the kids.)

So there I was, chasing the stupid dog over four acres. The sweet lady just swiveled her head as he’d whoosh past her. I was practically screaming at him, “She doesn’t love you! She doesn’t even like you! I do! Come home with me!”

I know he was thinking, “Yeah, lady, I love you when you’re holding a slab of bacon. But this new chick? Four acres, baby, and a whole host of new smells. You can’t compete. Get in your car and go home, alone.”

But eventually he tired. He got in the car, promptly fell asleep and came home with me.

As I drove away, I realized that though my kids don’t appreciate me either, at least they don’t pee on St. Francis.
Posted by Julie Kennon at 5:35 PM