From magical to miserable...my Halloween journey 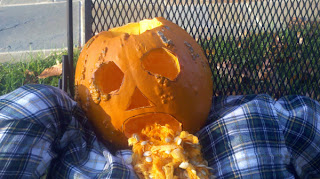 Magical Halloween memories of my childhood:

1. How it thrilled me, year over year, to choose between dressing up as either a nurse, a doctor, a firefighter or a mouse. (I have no idea why, but I think I always chose the mouse, without fail. Now that I wouldn’t be caught dead parading around in a gray leotard and tights, I’m happier than hell I showed off that cute figure before it went down the toilet.)

2. The stuffed pillowcases of candy. How my arms hurt from carrying the loot around all night. How I’d dump out all the candy on the floor, let my mom make a cursory inspection to rule out the razor blades that some evil, crabby old man was sure to slip into our Tootsie Rolls, and then go to work on it with a laser-sharp focus.

3. And by work, I mean what should have been the earliest indication of my as-yet undiagnosed OCD. Sort by color. Sort by type. Sort by type of chocolate, which was a subset of type. Sort by size. Sort by filling. Sort in order of how much I liked it. Then trade. Trade with all the siblings...John and Jennifer, since they could carry tons of candy, too, and then with the twins, Michael and Mathew, who were younger and easier to boss around.

4. Remembering the awe with which I would gaze at the candy, not really believing it was all mine, all for me, and I could hide it from my siblings, but they wouldn’t even come looking for it because they had their OWN. And then I remember that really sick feeling when I realized my mother was right, and too much candy would make me throw up.

5. The feeling of excitement so intense I would almost burst, because I knew it went HalloweenThanksgivingChristmas and that all the magic was about to start and that it was almost too much for one kid to take.

So that was then.

1. That I had to buy the bags of Kit Kats and Reese’s Peanut Butter Cups three times because I (wisely) hid all the Halloween candy from the kids and then (unwisely) remembered where I put it. Every day. For a month.

3. The fact that, as I’ve made abundantly clear on Twitter, Caroline decided to dress as a DJ with her friends. The whole outfit, since she had to match everyone, cost $150 and made her look like a crack dealer. A high-end crack dealer, if such a thing exists.

4. The fact that Jack wielded the sword to his ninja costume so enthusiastically, for so long, that Caroline got sick of it and whacked him with it and he got a major defensive wound on his hand and she started to cry, which was totally backwards, since he’s the one who had blood streaming down his arm.

5. That a little girl came over and told me her mother thought our Halloween decorations were tacky and we retaliated by allowing Caroline to park a puking pumpkin in our front yard.

6. The moment I realized we had launched HalloweenThanksgivingChristmas and I freaked out because I know my stress level is about to skyrocket because the lists and the decorations and the traveling and the gifts and the parties and just shoot me now so I don’t have to get started.

My mom hated Halloween and I thought she was nuts. Now, as with many things, I’m starting to see that maybe mama was right on.
Posted by Julie Kennon at 2:41 PM