Pour the wine and THEN get your gun

I come from a big family.  I have four siblings, and we were all born really close to each other (my older brother and I are eleven months apart, to the day, and two brothers are twins), and we’re a rather raucous bunch for having worn prep school ties and debutante dresses.


(You think that you can assume that the two girls wore the dresses.  But you haven’t met my brothers.)

Four of us live here, and one of us doesn’t.  So the doesn’t one came in town to visit us and my dad over the weekend.
I texted his twin a few weeks ago: Do we have any plans for the night Mathew is in town?
He responded: Thanks for offering.  Your house, dinner party, 7 pm.  Get lots of wine and lock up the dog, because I get frisky when I drink.


(He’s totally kidding.  This is the twisted sense of humor that runs in our genes.)
I love my family.  I do.  But they exhaust me.  As they did Saturday night.
I bet my family dinner party is totally unlike any dinner party you’ve ever attended in your entire life.
Why?  Well.

For example…one brother wouldn’t drink wine that cost less than $50 a bottle.  I was hiding the good wine from him and, at the same time, I couldn’t convince another brother to take his motherf**ing Budweiser beer can off my beautifully set table.
For example…a third brother occupied himself with magazines and scissors for a frighteningly long time.  I later realized he was replacing my framed photos with the pictures he was cutting out.
Don’t believe me?  I don’t know any of these people.  And I don’t take pictures of salmon fillets. 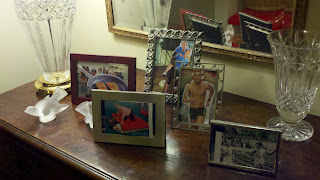 For example…my more-elderly-than-his age, previously dignified father responded to the question “What have you been up to?” with a grin and an enthusiastic “I’ve been watching Girls Gone Wild!”  (I don't actually know what that is.  And I'm scared to Google it.  I don't want to have to evict the old guy.)
For example…my very funny neighbor stopped by to bring me scallions.  And realized this wasn't your ordinary dinner party.  And pulled up a chair.  And stayed.  When her irritated husband called her home to walk the dog, she went home, got the dog, came back in the house, let the dog off the leash and poured another glass of wine.
For example…she wasn’t the only neighbor who came over with a dog, let the dog off the leash inside and poured a glass of wine.
For example…when I look at the pictures taken of my dad and his five kids, someone is always holding asparagus spears so they look like they’re coming out of my father’s ears.
For example….there were five empty beer bottles balanced on top of my family room ceiling fan on Sunday morning.  Just daring someone to turn it on.
I am, undoubtedly, the most conservative, staid member of the bunch.  I think my sister sensed my feeling that I was losing control, so she arranged a little outing for us on Sunday: 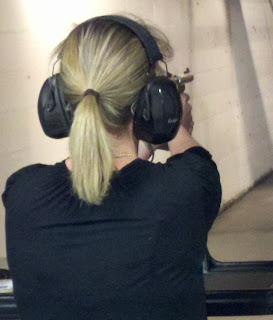 I was a pretty good shot. 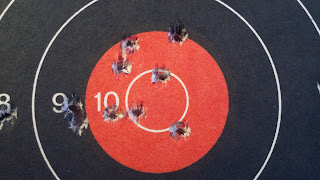 So next dinner party?  I’ll keep everyone in line.
Trust me.
Posted by Julie Kennon at 3:38 PM