...and then I was banned from the sidelines. 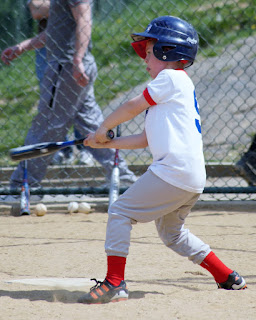 We all say it. We’ve all read the articles in the New York Times. We’ve all heard about the books and listened to the psychologists on talk shows. We know we have to let kids lose, we have to let kids fail, we have to let kids be kids and make mistakes. Not every kid should get a trophy for showing up, right? They’ve gotta earn 'em. That’s the new message to parents. And, for the most part, we say we believe it. We say failure makes our kids strong! Let them fail a test. Let them be the kid who scores for the other team during a soccer game. It’s okay! we claim. It’s life! we tell each other.

Because you know the feeling.

Let me take you back to last weekend.

I’m on the sidelines of a Little League baseball game.

Jack steps up to bat. Bases are loaded, two outs. His big brown eyes stare at the metal pitching arm. Opposing coaches implore the fielders to “get ready” or “play at any plate, just get the out!” Jack earnestly knocks the ground with his bat, purely for show, and then adjusts his position until his coach or his dad gives him a thumbs-up: knees bent, elbows up, feet straight.

The first mechanical pitch – a real beauty – sails right over home plate without even a wild swing to deter it.

The second draws a futile swing that’s so hard the batter spins around in a circle.

The third is knocked off as a foul.

Ten Little Leaguers jump up and down screaming, "You can do it!" and, randomly, "Make us proud, Jack!"

My husband sits back, relaxed. Jack’s sister is playing soccer in the outfield with other kids. No one is really feeling any tension.

I’m in the throes of a panic attack, praying frantically that he just makes contact with the ball.

I want the damn kids to shut up and stop distracting him.

I’m thinking that he HAS to get a hit, HAS to knock in a run.

"Come on, Jack," I silently implore, "You’ve been to the batting cages! You knock the hell out of them in practice. It’s a GAME, buddy, don’t screw it up!"

The coach manning the pitching machine signals Jack to adjust his stance.

Jack wiggles his feet in the dirt.

The coach counts down.

I can't believe how painstakingly painful this is for me.

"He's not going to do it. He looks too relaxed."

The pitch is coming.

"HIT IT, FOR THE LOVE OF GOD!!!" I scream. Maybe in my head, but judging from the look my husband gives me, maybe a little bit out loud.

He makes contact. It’s sort of an unintentional bunt.

A run scores. Jack is safe on first, his little alien-head batting helmet (his personal one, because you know I’m a little freaky about lice) beaming almost as brightly as his smile.

I cheer. I clap. I whoop and yell.

I collapse into my beach chair.

As my heart rate lowers, I wipe a little sweat off my forehead and try to act nonchalant.

Whit is staring at me.

"Uh, you know," I comment offhandedly, "That was good and all, but it would’ve built character if he’d have struck out."

"Right." He turns back to the game. "You are completely crazy," he mutters.

He looks at me over his shoulder. "And Jul?"

"I know," I reply, hanging my head. "That was just the first inning."