When my mom was alive, she and my dad would celebrate their birthdays in a very refined, elegant way. There was a beautiful place they’d go to dinner; it always had a live band and tuxedoed waiters. After dessert, the ceiling would be rolled back and they would dance under the stars.

Fast forward almost seven years and my dad lives with me. My ceilings don’t move and the only live music is Caroline practicing her recorder.

Yesterday my dad turned 78. I think he’d be the first to agree he’s not that thrilled to be celebrating yet another birthday. He seems perfectly happy, but he’s not a particularly young 78 and I think life, at this point, is tedious for him.

However, he’s got five kids. And we’ve all got kids. And we were going to celebrate his birthday, damnit, whether he liked it or not.

I tried to think of a dinner that would feed a ton of kids and adults, and I settled on spaghetti and meatballs. Which is fine, but I have a pathological fear of running out of food when I entertain, so I made 15 dozen meatballs. It took me all day. (Now, before my undiagnosed OCD gets blamed for me counting the meatballs, I only know how many there were because I lined them up in rows of 12 as I made them. Then I counted the rows. Yeah, maybe that’s a little OCD. Never mind.)

Mid-afternoon, I got a text from my dad.

"What’s the dress code for tonight?"

Late afternoon, my brothers and sister and their families started showing up. It was instant chaos. Whit was trying to take business calls and kids were hiding under his desk in a game of hide and seek. The dog was barking, we temporarily lost a three year old, Nerf darts were flying past my father’s head. It was, to say the least, a far cry from the serenity of his birthdays past.

After dinner my father asked me for a finger bowl. I nearly choked on my wine.

(I hope he was kidding.)

Once dinner had been cleared (and by "cleared," I mean all the kids put their plates on the floor and let the dog lick them clean) (and yes, there’s a sanitizing feature to my dishwasher), we brought out the cake. My older brother had brought it, and he thought it would be really funny to put 78 candles on it.

Without realizing my dad has ADVANCED LUNG DISEASE. 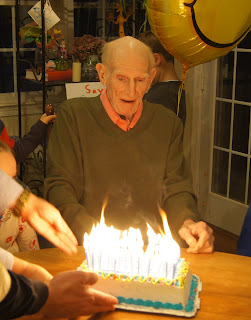 Clearly my father didn’t think it was a good idea, either.

So over my shouts of, "He has COPD! My house is going to burn down!" all the kids gathered around Grumpy and, with spit flying, blew out all 78 damn candles.

(I hope he was kidding.)

Since copious amounts of wine are always involved in our family dinners (don’t judge; we’re Irish), another brother escorted my dad back down to his apartment (that was the blind leading the blind but I was looking for the three year old so I let it go).

Later that night, after my sister made everyone leave together so all the toddler meltdowns would occur at exactly the same time and no one would be able to whisper about her kids’ behavior, I got a text from my dad.

"Thanks for making my birthday so nice."

I know he meant, "But don’t you dare do it again next year."