Are you ready for some FOOTBALL??

In particular, he loves the Denver Broncos.

(He went to flight school in Colorado and swears he frequented a bar that was also frequented by John Elway. In guy-speak, enough said.)

For some of us.

My thoughts are crystal clear: will the kids have done their homework? How late should I let them stay up? When can I prep the food? Who can I invite that will have to go home early to put their kids to bed? Who can I invite that won't make a mess? I can’t wait to see that cute puppy in the Budweiser ad. Will Whit remember to wake me up so I can watch the fourth quarter?

My husband’s thoughts are also, for the moment, crystal clear: barbeque. Beer. Chips. Who can I invite that won’t talk except during the commercials? Who can I invite that will not say one nice thing about the Seahawks? And where is that mariachi band when you need it? They could play the Broncos fight song. Is there a Broncos fight song? I need a Broncos flag. Wait, first I need a flagpole. Nah, I think I need a beer. Thinking of beer, what are the chances I can convince Julie to buy this to hold all that beer? 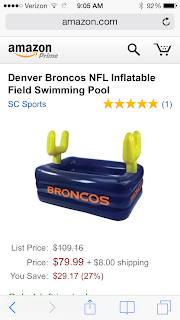 I give up. All you mariachi-playing, sombrero-wearing, tequila-swilling Broncos fans, I've got your soul mate right here. Just don't talk and you can sit next to him during the game.

I'll be upstairs in my pajamas. Yell when that cute commercial comes on.