There’s so much I should be writing about right now.

Like how I pulled my kids out of school and drove directly into the apocalyptic, epic snowstorm last week.

Like how I drove 90 miles an hour and literally allowed one stop – “PEE AND GET CHIPS” – on the seven-hour trip, all in an attempt to beat the snowstorm advancing from the south.

Like how I failed to beat it about an hour outside of Knoxville.

Like how I swung through the Knoxville airport and picked up my husband, stranded by the storm while on a business trip.

Like how we drove through white-out conditions, on r-e-a-l-l-y slippery mountain roads.

(Like why the only reason we did it was so that my husband could stand in his mother’s house on her 75th birthday, and call her on the phone to ask if our present had arrived. Like how she said no, and he suggested she check the kitchen. Like how the kids were standing in the kitchen with balloons, hopping up and down with the excitement of a killer and thoroughly unexpected surprise.)

Like how I let my kids sled down this: 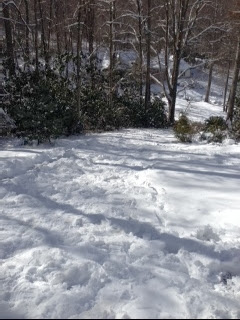 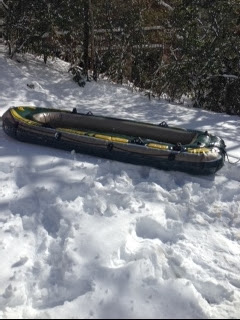 But I won’t go into detail about all that, because I just don’t have time.

Because we didn’t come home alone.

Because Lab Rescue texted me somewhere along the drive north. 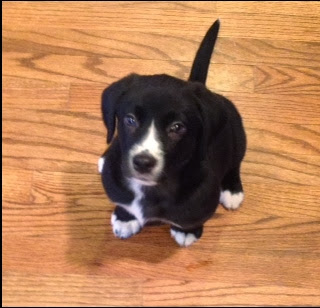 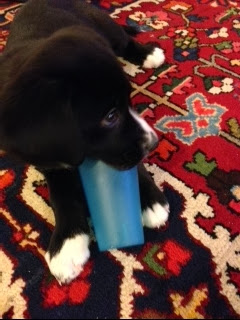 And the most bittersweet love in the entire world, because we still miss Bo(eing).

But we sure do love Piper.

(And, obviously, airplane names for dogs.)

So while she’s napping, I’ve got to run and do all the things I can’t do with a wide-awake puppy.

And I'll try very hard to keep the cute puppy pictures to a minimum.