Have you guys heard about the project called 100 Happy Days? My friend Carly started posting pictures on Facebook with the hashtag #100HappyDays, and it made me curious. If you check out the link, you'll see that some kid (okay, he is 27, and sadly that is a "kid" to my almost-44-year-old self) started the challenge in December because, "I believe that being happy is a choice and everyone can be happy just by appreciating little things in life one has instead of engaging in the constant chase for ever rising internal & external expectations, which leaves no time for being happy." I won't comment on the grammar, but I love the sentiment. He asks that you join the challenge, and then every day, for one hundred days, you post a picture of something that makes you happy. Anything!

Last year took a toll on my happy, optimistic self. We started 2013 with a horrible and shocking loss that shook our whole family, moved on through a lengthy hospital vigil while one of my best friends from high school prayed her 12-year-old-daughter wouldn't die (she didn't), sailed through the fall down the stairs that nearly killed me, enjoyed the summer and then launched into my dad dying, my beloved dog dying, and a ridiculous hospitalization for me because things were trapped in my uterus (yup, try to figure that one out). I started 2014 with a guarded optimism that grew as the first few months were actually pretty nice, then I got crabby all over again when this damn disc popped in my back, flattened my nerves, numbed my leg and caused constant and unending pain.

That whole complainy paragraph is to say that I'm not feeling too happy. I'm definitely not noticing things that should be making me happy, and I am probably not that fun to be around.

So! The challenge. I'm in. I'm going to post on Twitter (@muchmamadrama) if you care to follow along. I told Caroline about the idea of using Instagram for good, not evil, and she's going to start the challenge with a few of her friends...and I can't imagine a better exercise for middle-school tweens.

So here's my first picture. This was actually taken yesterday, when Whit, Jack, Caroline and I took Piper on a hike during our spring break trip. Bear in mind, Whit is still feeling crappy from the flu, Jack is still complaining about strep, and Caroline still thinks it's too cold for spring break. My back still hurts and Piper's not perfect when we drop her leash. I had plenty of negatives swirling around my brain, yet I did stop and appreciate this moment, when Caroline grabbed Piper's leash and sprinted down the path with her. It made me thankful for my beautiful, strong, healthy daughter, and my crazy puppy, and the crisp spring air, and the very lovely experience of a family hike. 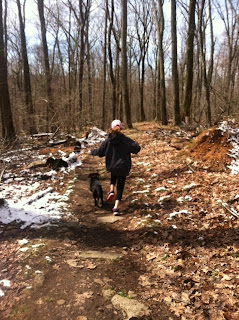 Posted by Julie Kennon at 11:48 AM No comments:

The opposite of effortless

Hey, all you people posting happy, sundrenched Facebook pictures of your spring break trip...yes, you drinking fruity drinks in Puerto Rico, you frolicking in the sand in Palm Beach, you seeing hot Broadway shows with the family:

Because I am jealous.

Like you twinkled your perky little noses and you were transported to said drink/beach/show.

I, too, have a trip planned for this week. I, too, want to frolic and drink fruity drinks. I don’t even like Facebook but I could be convinced to post pictures if I were ten pounds lighter, in a bikini, on a beach, with a fruity drink, brought to me by a cabana boy. I would like to be on a porch, looking at a lake, reading a book. I would like to be in a hot air balloon, despite my fear of heights.

But it’s not, and I haven’t even left my house.

Maybe my angst is because I am kicking the malfunctioning sump pump every ten minutes because it is raining so hard that I swear to you Noah and his ark just floated down the street.

Maybe it’s because my husband, who is usually very helpful at times like these, has the stomach flu. Did you hear me? He's a man. And he's sick. Enough said.

Maybe it’s because Jack has strep and is complaining quite a bit, though I would point out the strep was a sneak attack and his throat didn’t even hurt until the lab results came back.

Maybe it’s because Caroline is...Caroline, saying that “yes I am excited about our trip but I wish it was going to be warmer there.” (Why, honey? Did the snow in the forecast throw you? Because yes, it will snow there. Yay. More snow.)

Maybe it’s because I am still dealing with that whole, painful devil-in-my-MRI issue.

Maybe it’s because I want to twinkle my perky little nose and be transported to our destination.

I will pack. I will get gas and fill the car with luggage and ditch the guinea pig (thank you, LW) and take out the trash and turn off the A/C and water the plants and kick the damn sump pump one more time and then turn on the alarm and toss the strep kid and his antibiotics and the stomach flu guy with a barf bag and the puppy fully satiated thanks to the poop and the tween with her mind-numbing iPhone…I will toss all of them in the car, and I will drive far away.

To a lake, and a porch, and a book, and maybe even a fruity drink.

Let me begin by telling you that I am not a drug person. Though I’m sure drugs were rampant in my private girls’ high school or at the “party hard” college I attended, I never saw them. We drank Sun Country Wine Coolers and thought we were cool; we never really felt the need to search out anything stronger.

Except, in fact, I once mentioned to my mom that we were going to try “ex” on a college spring break trip. I knew nothing more about it than that name and that it gave you energy and you could probably lose weight because you’d be dancing all night.

(The mom in me now knows I was probably actually referring to Ritalin. Which still sounds tempting.)

My mother, perfectly suited to manage five children, said, “For the love of God, you have enough energy as is. Don’t waste your money.” And that was that.

For the past (how old is that giant baby I carried?) nine and a half years (no coincidence), I have had problems with my back. I like to run and bike and hike and lift weights and take exercise classes and a long time ago, my lower back gave me the finger and told me to stay in bed. I didn’t, so it retaliates every now and then.

It retaliated hard over the weekend.

Actual conversation with my doctor Monday:

Me: What do you see on the MRI? The devil?

Me: Hey, don’t knock it. People see Jesus on a piece of toast.

Dr. F, squinting at the MRI: Well, actually, it does look pretty bad…

“Pretty bad” translates to me, in the emergency room, on Saturday. Crying. Begging them to hit me over the head with a baseball bat so the pain would stop for five minutes. (Ignoring my husband’s curiously enthusiastic request to be the one holding the bat.) Accepting a dose of Percocet, even as I acknowledged that upon ingesting it, I would likely never poop again.

Nothing worked. All I could do was pace, because if I stood still/sat down/lay down/sneezed/laughed/breathed I would be in even more pain, and it was already excruciating. So I paced. And paced. And cried because it hurt and I had been pacing for seven hours and I just wanted to sit down.

Then along came Nurse Tony. And his little IV.

And oh my God, if I could abuse whatever was in that IV, I would recklessly abuse it. The moment he pressed down the plunger, I felt it start in my arms and move all the way to my feet. My back went from a 10(0000) on a scale of 1 to 10 to a .5. My hip stopped throbbing instantly. I sat down. I actually laid down. He asked why I was still crying and I had to explain the relief I felt.

After a little while, my leg got shooting pains in it.

There was Nurse Tony, with another dose.

No more pain. Practically no more consciousness. But I didn't care.

If insurance people weren’t so picky, I would have checked myself into that hospital and kept that drug flowing until they could fix the problem.

I told my doctor about it, and his eyes lit up. He had kidney stones, he told me, and the same drug worked miracles.

“In fact,” he said, “I’ve been told the feeling it gives you mimics the way heroin makes you feel.”

I raised my eyebrows.

Mama might just have found herself a new career. And a happy back.

(I'll ignore how thrilled my husband looks at the thought of a second paycheck, regardless of its origins.)


Posted by Julie Kennon at 9:37 AM No comments: