Letter to my son's third-grade teacher 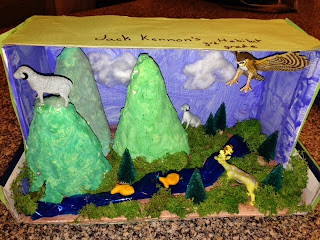 Did you like Jack’s habitat? We thought that was such a cool assignment – pick a habitat and make a diorama. I used to really, really love making dioramas, so this was right up my -- er, his -- alley! Your explanation of your expectations was clear and I instantly asked Jack which habitat he wanted. He selected the mountains. I very gently suggested that mountains might be a common choice and asked him to consider something more exotic, like the Serengeti, but he was really clear he wanted the mountains, and this was, after all, his project. I really can’t stand those overbearing mothers who don’t let their kids just do projects themselves, you know?

We were running short on time, and your letter did say parents could help, so I went ahead and went to the craft store while Jack was in school. I thought I’d dump a bunch of things on the table and let him at it! He didn’t really understand the role of the blue cellophane, so I told him I thought a mountain stream was a great idea. He loved it.

Now, I thought it would be cool if the mountains were made of paper mâché, and that takes a really long time to dry, so I did spend about three and a half hours making the mountains and baking them in a 100 degree oven while he was in school. Clearly that was a mom job, right? I mean, ovens and all. Total danger.

He did paint them all by himself. To be helpful, I created a little palette of three mountainy colors on a paper plate, and told him to just go nuts and let his imagination run wild.

The horned owl swooping out of the sky was my idea, and Jack did try to affix the fishing wire himself, but, honestly, you and I both know he’s all thumbs so it was easier for me to do it myself.

He didn’t like all the moss I bought. But I quickly googled it and told him that the mountain goats I bought do, in fact, eat moss, so he didn’t seem to mind as I added more and more moss every time I walked by.

He was super excited when he came home and saw that I glued Goldfish into the stream! I told him that made the outstretched claws of the horned owl more realistic, and he liked that so much he worked it into his presentation.

And the clouds. Weren’t they great? He was adamantly against clouds, but I had his sister run up and grab a few cotton balls and I taped those suckers in and even he agreed they look good.

Now, the mountain goat stuck in about an inch of dried hot glue on the very top of the mountain? Jack wanted to be absolutely certain you could tell that mountain goats climb mountains. I pointed out that the baby goat I had delicately tip-toeing up the mountain (with minimal glue) was sufficient, but he disagreed, and hey, it’s his project, right? So that part was all Jack. And the end of my glue gun.

Anyway, hope you loved it. He worked very, very hard on it.

(Truthfully, though, I still don’t understand why my husband patted him on the back this morning and said, “Don’t worry, buddy. She told me I could help, too.”)

It was great fun and he learned a ton! Fabulous project. We’d love to see more like that.