It's how you play the game

It’s a tough time of year if you’re a kid who likes to play soccer and wants to be on a “select” team. At least where my daughter’s to-be seventh grade and my son’s to-be fourth grade teams are concerned, it was a weekend of tears, anger, threats and rumors. And that was just the parents.

Standing in stark contrast to the stress of soccer is the joy of my son’s baseball team. There’s room for everyone; Jack is appreciated whether he knocks out a triple or an outfield ball flies right past his mitt and the other team scores. The games are on Sunday evenings at 5:00, in our neighborhood, and the ice cream truck is always strategically parked near the field. As dogs and players’ siblings run around, the parents form an enthusiastic sideline with pretzels and opaque Solo cups passed from friend to friend. It’s always a good time, and everyone in my family...from Whit to me to Caroline to Jack...looks forward to the games.

One of the coaches is moving to Hawaii this summer, and they need another assistant coach to run practices and help with games. Jack has always begged Whit to coach one of his sports, and he quickly asked if Whit would help out.

Jack, who is old enough to understand his dad's sense of humor and roll his eyes with considerable talent, did so. And the matter was forgotten.

Until the game last night.

When the coach handed this to Whit: 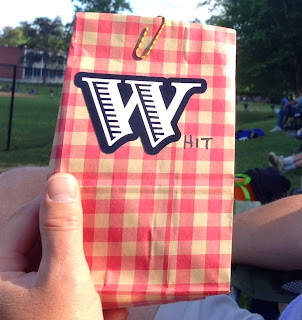 And this note was inside: 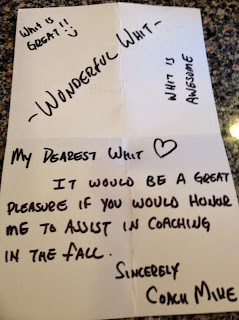 With two airplane bottles of scotch: 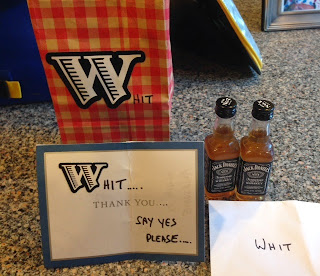 And my husband shouted onto the field, “You had me at ‘Whit.’”

And that, ladies and gentlemen, is the right spirit (ha ha, get it?) for childhood sports.