“The definition of insanity is doing the same thing over and over again and expecting different results.”

Who said this? Albert Einstein? Rita Mae Brown? Narcotics Anonymous? Doesn’t matter, just lock me up in the looney bin.

Because, yet again, I tried yoga. You may recall that I’ve tried hot yoga without success. I’ve also tried warm yoga and down dog yoga and up dog yoga and general yoga and every time, I shake my head, resigned to the absolute knowledge that yoga and I don’t mesh.

After the mind-blowing decree from a neurosurgeon that I cannot run (or, as I like to interpret it, I cannot run right now), I once again thought I’d give yoga the old college try.

“Expecting different results.” Sigh. I’m an irrepressible optimist. And yet, as I sit here on the backside of yet another class, I must realize once and for all that yoga is NOT for me. Why? Well...

1. My boobs really are too big. There’s no “gracefully reach your lunge forward and gently frame your front foot with your hands” happening in any sort of zen way for me. Rather, it’s “wrestle those mofos out of the way and plunge your hands forward to the ground before those suckers swing back and you can’t reach your front foot anymore.” The zen goes right out the window.

3. If I stay in one place and sweat, I smell. It’s not a bad smell, it’s kind of a body-wash/deodorant smell, but I do not like to smell myself. When I run, I don’t smell myself until the end (and truthfully, that’s not always such a great smell). Then I started to think I could probably smell other people, too, and they most likely didn’t shower before yoga like I did, and that grossed me out so I tried not to breathe. Which defeats the whole purpose of a class based on the principles of deep breathing. And left me gasping for air. Totally not zen.

4. I found myself mentally arguing everything the teacher was saying. For example, “Where you are right now is where you’re supposed to be.” Not true. I was supposed to be at Bed, Bath & Beyond, but I got sucked into the yoga class instead.

5. My balance is kind of...well...nonexistent. So if I was to balance on one leg and lean forward and stick my arms out in front of me and stick my other leg out behind me, say, then I bet I would totally and loudly fall over and the teacher would have to come check on me again. Theoretically speaking, of course.

Okay, once and for all, I'm done with yoga.

Posted by Julie Kennon at 6:59 PM No comments:

Pizzle and the puppy 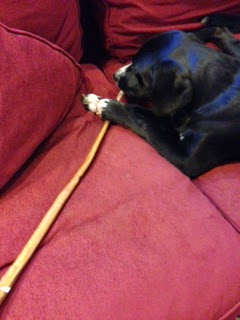 Our little puppy, Piper, was spayed this week. She didn’t have a great reaction to the surgery and ended up being very sick for about 24 hours, until we could get her back to the vet and get her stuffed with fluids, anti-vomiting drugs and heavy-duty painkillers.

Now that she's better, I wanted to buy her a little treat. I went to the pet store and bought her favorite thing: a hard, brown roll called a bully stick. The store only had them in the 24-inch size, so I bought it and brought it home for her.

The kids asked what, exactly, a “bully stick” is. I told them that one pet store employee responded to my similar question with, “You don’t wanna know.” I left it at that. My kids...did not.

Caroline: Jack, look at the tag. It says it’s made of bull pizzle.

Sidesplitting laughter from my two kids.

Jack, gasping for air: Pizzle is an old English word for PENIS!

PIPER IS EATING A BULL PENIS!

After they told me, told my husband, texted a few friends and laughed at a very confused Piper, they settled down.

And I heard Caroline say to Jack, sotto voce: That must have been a huge bull.

Posted by Julie Kennon at 8:03 PM No comments:

This vacation – the vacation we’ve taken for 18 consecutive years with my husband’s parents and any of his four sisters who want to come – starts as any other vacation starts.

With lists. Three-page lists full of items that need to be packed, each with an empty circle beside it that can be checked off with a feeling of satisfaction. Lists of to-dos, lists of in-case-of-emergency numbers for the neighbors. Lists of where the dog is going (where is her rabies certificate?), where the guinea pig is going (add that friend to the list of people for whom we need to buy presents) and who is taking out the trash (ditto). Lists of my clothes, the kids’ clothes, and Whit’s clothes. To dos and lists that leave me feeling exhausted but fully prepared.

We drive to this vacation of ours, anywhere from six to nine hours in the car. This is where I worry. I worry about traffic and I worry about my back hurting and I worry we’re going to get in an accident and I worry someone will drown on vacation. I worry that Whit’s parents will some day not be on this vacation with us. I worry my house will burn down, the dog will misbehave, I forgot to pay a bill that will be due while we’re gone. I worry.

We unload the car and I neurotically count our items and an efficient college student with an awesome summer job grabs our bags and bins and loads them onto a boat. Whit parks the car and says goodbye to it for a week. We board the ferry and it blows its horn and slowly chugs toward the island we’ll call home for seven days.

This island doesn’t have cars. We travel via golf cart, often with kids on laps and hanging off the back (shh). Our children learned this summer how to drive the golf carts, which gave them hours of thoroughly illegal fun (shh again…and pipe down, it was safe).

What I suddenly care about is pulling the kids out of the ocean, away from their cousins, to reapply sunscreen to pink noses and shoulders. I care about whether or not there are enough Mike’s Hard Lemonades in the cooler for each adult and some of the older kids to have another one. I care about whether the light will be good for pictures on the beach during our traditional twilight cocktail hour(s). I care about the faces of my kids as an older cousin launches them into the air in the ocean or their smiles as they race toward me on a boogey board.

Here, I don’t despair that the doctor told me I can’t ever run again. Instead, I care about long walks on the beach, whether they’re at 7 am and my heart is pumping or they’re in the middle the afternoon as my son stops every five feet to dig for coquinas or it’s a long stroll to chat with my mother in law. I care about whether the single, teeny store will run out of chicken before we have thought about what we’re grilling for dinner. I may idly wonder if I should run a load of beach towels through the wash or if the golf carts are all charged, but they’re generally passing thoughts.

This is my favorite vacation. It’s the only one in which I’m totally, and completely, unplugged. From my phone, my laptop, my iPad. My lists. My stressors and my worries.

It’s my family’s favorite vacation, too.